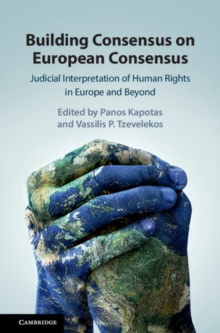 Building Consensus on European Consensus : Judicial Interpretation of Human Rights in Europe and Beyond Hardback

Should prisoners have voting rights? Should terminally ill patients have a right to assisted suicide?

Should same-sex couples have a right to marry and adopt?

The book examines how such questions can be resolved within the framework of the European Convention of Human Rights. 'European consensus' is a tool of interpretation used by the European Court of Human Rights as a means to identify evolution in the laws and practices of national legal systems when addressing morally sensitive or politically controversial human rights questions.

If European consensus exists, the Court can establish new human rights standards that will be binding across European states.

The chapters of the book are structured around three themes: a) conceptualisation of European consensus, its modus operandi and its effects; b) critical evaluation of its legitimacy and of its outputs; c) comparison with similar methods of judicial interpretation in other legal systems.