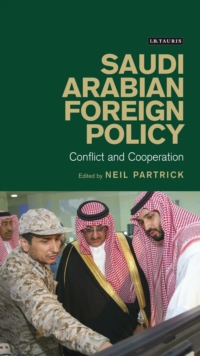 As the only oil producer with sufficient spare capacity to shape the world economy, Saudi Arabia is one of the most significant states in twenty-first century geopolitics.

Despite the enormous potential for Saudi Arabia to play a more robust regional and international role, the Kingdom faces serious internal and external challenges in the form of political incapacity and competition with states such as Iran.

In this examination of Saudi Arabia's foreign policy, Gulf expert Neil Partrick, and other regional analysts, address the Kingdom's relations in the Middle East and wider Islamic world, and its engagement with both established and emergent global powers.

In doing so, he analyses the factors, ranging from identity politics to Iranian acquisition of nuclear weapons that determine the Kingdom's foreign policy.

As Saudi Arabia prepares for a generational shift brought about by an ageing leadership, the rapidly changing balance of power in the Middle East offers both great opportunity and great danger.

For students of the Middle East and international relations, understanding Saudi Arabia's foreign policy and its engagement with the region and the world is more important than ever.