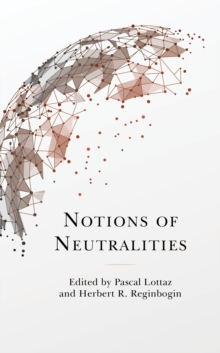 Neutrality serves different purposes during times of war and peace. 'Notions of Neutralities' portrays those historical challenges that neutrals faced, and are still facing, to maintain some form of economic stability and political order as chaos and wars rage.

Neutrals are exposed to existential issues and questions of civil-society, international politics, and morality, in a world defiant to principles of universal peace.

Every age has its own armed conflicts and while the questions they raise are often the same, the answers are different because the international word order changes.

Is neutrality justifiable even when the humanity of civilization is at risk as in the Second World War or the wars of the post-Cold War era?

Can those who refuse the call to arms still act by providing humanitarian services to contain the impact of war or, on the contrary, are neutrals shut-off from global politics - mere weaklings that "suffer what they must?"This book addresses such questions through an interdisciplinary scholarship by some of the world's foremost experts on neutrality.

Twelve chapters tackle different but profound aspects of the concept over a span of five hundred years.

They succinctly show the evolution of international norms in the context of war and peace.

What is more, the essays portray fundamental categories of thinking about a variety of neutralities that the international system has produced in the past and present.

The authors discuss the complexities of neutrality, providing a new and refreshing understanding of international relations and security for the past as well as for the multipolar world of the twenty-first century.