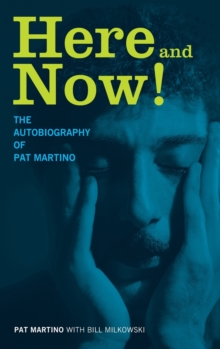 Here and Now! : The Autobiography of Pat Martino Hardback

By age 18 Martino moved to Harlem where he quickly earned a reputation as a hard-bopping six-stringer with formidable chops through a series of apprenticeships with the likes of honking tenor saxophonist Willis Gaitor Tail Jackson and Hammond B-3 organ master Jack McDuff.

Martino made his auspicious debut as a leader at age 22 with 1967's EEl HombreE on Prestige and followed with a string of potent recordings for the label that further established him as one of the most distinctive guitar voices on the jazz scene.THThen at the peak of his powers the bottom fell out.

In 1980 he underwent surgery as the result of a nearly fatal brain aneurysm.

The surgery left him without any memory of the guitar or his musical career.

From that point Martino undertook the long process of recovery eventually learning how to play the guitar again; but more important learning to transcend the instrument itself and live his life completely in the moment.THMore than just the remarkable story of one of the most original and profoundly influential guitarists in jazz history this extraordinarily revealing autobiography is also a survival manual of sorts in overcoming incredible adversity and learning to live in the here and now.