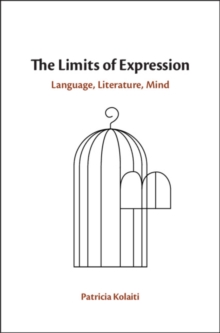 Taking as its starting point what is sometimes called 'the prison house of language' - the widespread feeling that language falls terribly short when it comes to articulating the rich and disparate contents of the human mental tapestry - this book sets out a radically new view of the interplay between language, literature and mind.

Shifting the focus from the literary text itself to literature as a case of human agency, it reconsiders a wide range of interdisciplinary issues including the move from world to mind, the existence or otherwise of a property of literariness or essence of art, the nature of literature as a unique output of human cognition and the possible distinctiveness of the mind that creates it.

In constant dialogue with philosophy, linguistics and the cognitive sciences, this book offers an invaluable new treatment of literature and literary language, and sketches novel directions for literary study in the twenty-first century.