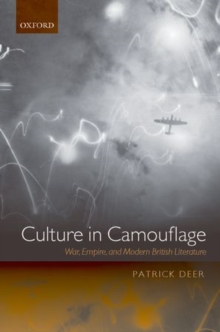 Culture in Camouflage aims to remap the history of British war culture by insisting on the centrality and importance of the literature of the Second World War.

The book offers the first comprehensive account of the emergence of modern war culture, arguing that its exceptional forms and temporalities force us to reappraise British cultural modernity. The book explores how writers like Ford Madox Ford, Siegfried Sassoon, Wilfred Owen, T.E.

Patrick Deer reads war literature as one element in an expanded cultural field, which also includes popular culture and masscommunications, the productions of war planners and military historians, projections of new technologies of violence, the fantasies and theories of strategists, and the material culture of total war.

Modern war cultures, Deer contends, are defined by their drive to normalize conflict and war-making, by their struggle to colonize the entire wartime cultural field, and by their claim to monopolize representations and interpretation of the conflict.

But the mobilization of cultural formations during wartime reveals, at times glaringly, the constitutive contradictions at the heart of modern ideas of culture.

The Great War failed to produce a popular war culture on the home front, producinginstead an extraordinary literature of protest, yet the strategists struggled to regain their oversight over both the enemy across no man's land, and the minds and bodies of their own mass conscript armies.

The interwar years saw a massive effort to make strategic fantasies a reality; if the technologyof imperial air power or mobile armoured warfare did not yet exist, culture could be mobilized to shore up the ramshackle war machine.

During World War Two a fully fledged British war culture emerged triumphant in time of national crisis, offering the vision of a fully mobilized island fortress, a loyal empire, and a modernized war machine ready to wage a futuristic war of space and movement.

This was the struggle that British World War Two writers confronted with extraordinary courage andcreativity.