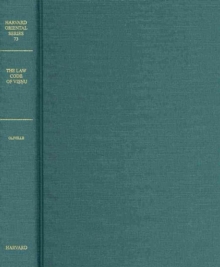 The Law Code of Visnu : A Critical Edition and Annotated Translation of the Vaisnava-Dharmasastra Hardback

"The Law Code of Visnu" ("Vaisnava-dharmasastra") is one of the latest of the ancient Indian legal texts composed around the seventh century ce in Kashmir.

Both because the "Vaishnava-Dharmasastra" is the only Dharmasastra that can be geographically located and because it introduces some interesting and new elements into the discussion of Dharmasastric topics, this is a document of interest both to scholars of Indian legal literature and to cultural historians of India, especially of Kashmir.

The new elements include the first Dharmasastric evidence for a wife burning herself at her husband's cremation and the intrusion of devotional religion (bhakti) into Dharmasastras.

This volume contains a critical edition of the Sanskrit text based on fifteen manuscripts, an annotated English translation, and an introduction evaluating its textual history, its connections to previous Dharmasastras, its date and provenance, its structure and content, and the use made of it by later medieval writers.