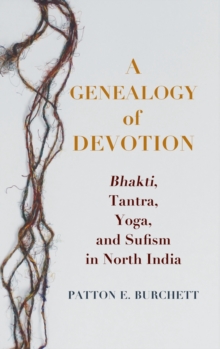 A Genealogy of Devotion : Bhakti, Tantra, Yoga, and Sufism in North India Hardback

In this book, Patton E. Burchett offers a path-breaking genealogical study of devotional (bhakti) Hinduism that traces its understudied historical relationships with tantra, yoga, and Sufism.

Beginning in India's early medieval "Tantric Age" and reaching to the present day, Burchett focuses his analysis on the crucial shifts of the early modern period, when the rise of bhakti communities in North India transformed the religious landscape in ways that would profoundly affect the shape of modern-day Hinduism. A Genealogy of Devotion illuminates the complex historical factors at play in the growth of bhakti in Sultanate and Mughal India through its pivotal interactions with Indic and Persianate traditions of asceticism, monasticism, politics, and literature.

Focusing on the Ramanandi bhakti community and the tantric Nath yogis, Burchett describes the emergence of a new and Sufi-inflected devotional sensibility-an ethical, emotional, and aesthetic disposition-that was often critical of tantric and yogic religiosity.

Early modern North Indian devotional critiques of tantric religiosity, he shows, prefigured colonial-era Orientalist depictions of bhakti as "religion" and tantra as "magic." Providing a broad historical view of bhakti, tantra, and yoga while simultaneously challenging dominant scholarly conceptions of them, A Genealogy of Devotion offers a bold new narrative of the history of religion in India.