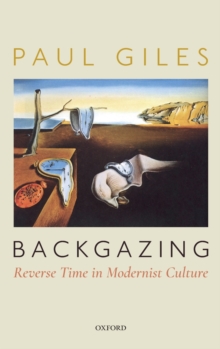 by Paul (Challis Professor of English University of Sydney) Giles

This volume trace ways in which time is represented in reverse forms throughout modernist culture, from the beginning of the twentieth century until the decade after World War II.

Though modernism is often associated with revolutionary or futurist directions, this book argues instead that a retrograde dimension is embedded within it.

By juxtaposing the literature of Europe and North America with that of Australia and New Zealand, it suggests how this antipodeancontext serves to defamiliarize and reconceptualize normative modernist understandings of temporal progression.

Backgazing thus moves beyond the treatment of a specific geographical periphery as another margin on the expanding field of 'New Modernist Studies'.

Instead, it offers a systematic investigationof the transformative effect of retrograde dimensions on our understanding of canonical modernist texts.

The title, 'backgazing', is taken from Australian poet Robert G.

FitzGerald's 1938 poem 'Essay on Memory', and it epitomizes how the cultural history of modernism can be restructured according to a radically different discursive map.

Backgazing intellectually reconfigures US and European modernism within a planetary orbit in which the literature of Australia and the Southern Hemisphere, far from being merely an annexed margin, can be seen substantively to change the directional compassof modernism more generally.

By reading canonical modernists such as James Joyce and T.

S. Eliot alongside marginalized writers such as Nancy Cunard and others and relatively neglected authors from Australia and New Zealand, this book offers a revisionist cultural history of modernist time, one framed by arecognition of how its measurement is modulated across geographical space.