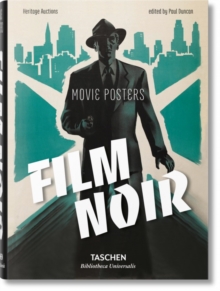 Back in Black The best of film noir movie posters It's time for some dark glamour.

Seven decades after the term "film noir" was first coined by French critic Nino Frank, this new collection celebrates the genre's graphic glory with hundreds of its finest posters over the decades, from The Big Sleep and Double Indemnity to Vertigo and Touch of Evil. The iconic images are organized chronologically and by key noir themes, including Love on the Run, Private Eye, the Heist, and the Psycho-Killer.

Captivating in their graphic distillation of noir's sinister beauty, the posters simmer with the same tension, paranoia, and eroticism as their movie equivalents.

Along the way, we find the directorial tours de force of Billy Wilder, Fritz Lang, Robert Siodmak, and more, and such stars of the genre as Humphrey Bogart, Robert Mitchum, Lauren Bacall, and Joan Crawford, resplendent in all their tough guy or femme fatale glory. About the series: Bibliotheca Universalis-- Compact cultural companions celebrating the eclectic TASCHEN universe at an unbeatable, democratic price!Since we started our work as cultural archaeologists in 1980, the name TASCHEN has become synonymous with accessible, open-minded publishing.

Bibliotheca Universalis brings together nearly 100 of our all-time favorite titles in a neat new format so you can curate your own affordable library of art, anthropology, and aphrodisia. Bookworm's delight -- never bore, always excite!Text in English, French, and German