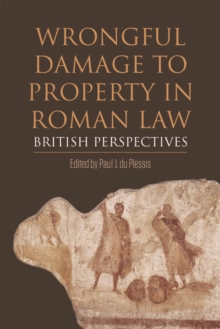 Few topics have had a more profound impact on the study of Roman law in Britain than the lex Aquilia, a Roman statute enacted c.287/286 BCE to reform the Roman law on wrongful damage to property.

This volume investigates this peculiarly British fixation against the backdrop larger themes such as the development of delict/tort in Britain and the rise of comparative law.

Taken collectively, the volume establishes whether it is possible to identify a 'British' method of researching and writing about Roman law.