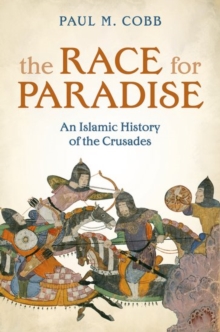 The Race for Paradise : An Islamic History of the Crusades Paperback / softback

In 1099, when the first crusaders arrived triumphant and bloody before the walls of Jerusalem, they carved out a Christian European presence in the Islamic world that remained for centuries, bolstered by subsequent waves of new crusades and pilgrimages.

But how did medieval Muslims understand these events?

What does an Islamic history of the Crusades look like?

The answers may surprise you. In The Race for Paradise, we see medieval Muslims managing this new and long-lived Crusader threat not simply as victims or as victors, but as everything in-between, on all shores of the Muslim Mediterranean, from Spain to Syria.

This is not just a straightforward tale of warriors and kings clashing in the Holy Land - of military confrontations and enigmatic heroes such as the great sultan Saladin.

What emerges is a more complicated story of border-crossers and turncoats; of embassiesand merchants; of scholars and spies, all of them seeking to manage this new threat from the barbarian fringes of their ordered world. When seen from the perspective of medieval Muslims, the Crusades emerge as something altogether different from the high-flying rhetoric of the European chronicles: as a diplomatic chess-game to be mastered, a commercial opportunity to be seized, a cultural encounter shaping Muslim experiences of Europeans until the close of the Middle Ages - and, as so often happened, a political challenge to be exploited by ambitious rulers making canny use of the language of jihad.