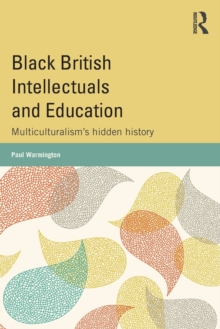 Ask any moderately interested Briton to name a black intellectual and chances are the response will be an American name: Malcolm X or Barack Obama, Toni Morrison or Cornel West.

Yet Britain has its own robust black intellectual traditions and its own master teachers, among them C.L.R.

However, while in the USA black public intellectuals are an embedded, if often embattled, feature of national life, black British thinkers remain routinely marginalized.

Black British Intellectuals and Education counters this neglect by exploring histories of race, education and social justice through the work of black British public intellectuals: academics, educators and campaigners.

The book provides a critical history of diverse currents in black British intellectual production, from the eighteenth century, through post-war migration and into the `post-multicultural' present, focusing on the sometimes hidden impacts of black thinkers on education and social justice.

Firstly, it argues that black British thinkers have helped fundamentally to shape educational policy, practice and philosophy, particularly in the post-war period.

Secondly, it suggests that education has been one of the key spaces in which the mass consciousness of being black and British has emerged, and a key site in which black British intellectual positions have been defined and differentiated. Chapters explore:* the early development of black British intellectual life, from the slave narratives to the anti-colonial movements of the early twentieth century* how African-Caribbean and Asian communities began to organize against racial inequalities in schooling in the post-Windrush era of the 1950s and 60s* how, from out of these grassroots struggles, black intellectuals and activists of the 1970s, 80s and 90s developed radical critiques of education, youth and structural racism * the influence of multiculturalism, black cultural studies and black feminism on education* current developments in black British educational work, including `post-racial' approaches, Critical Race Theory and black social conservatism. Black British Intellectuals and Education will be of key relevance to undergraduates, postgraduates and academics engaged in research on race, ethnicity, education, social justice and cultural studies.