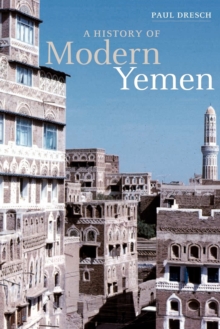 by Paul (University of Oxford) Dresch

To the outside world, Yemen is famous for its beautiful landscapes and architecture.

However, as Paul Dresch demonstrates, Yemen's modern history is unique and deserves to be better understood.

While the borders of most Middle East states were defined by colonial powers after the collapse of the Ottoman Empire, a single Yemeni state was not formed until 1990.

In fact, much of Yemen's twentieth-century history was taken up constructing such a state, forged after years of civil war between the North and the South.

The story is a complex one, but the author handles it masterfully, employing his skills as an anthropologist to re-enact the experiences of those involved through personal encounters and a first-hand knowledge of the region.

The narrative is fast-moving and interactive, introducing the non-expert painlessly and pleasurably to a little-known slice of Arab history.

Conversely, the expert will find much that is new on every page.