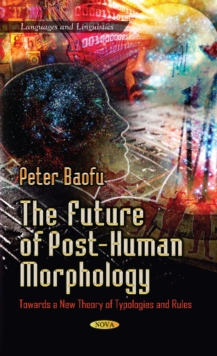 Future of Post-Human Morphology : Towards a New Theory of Typologies & Rules Hardback

Are words really so determined by rules that, as Leonard Bloomfield once argued in defence of the "morpheme-based" morphology, "word forms are analysed as arrangements of morphemes", such that there are "rules to combine morphemes into word forms, or to generate word forms from stems "? (WK 2012) But there is an opposing approach to morphology known as the "word-based" morphology, which "takes paradigms as a central notion", in that it "states generalisations" which categorise "words based on the pattern they fit into.

This applies both to existing words and to new ones.

Application of a pattern different from the one that has been used historically can give rise to a new word", (WK 2012) Contrary to these opposing approaches (and other ones as will be discussed in the book), morphology (in relation to both typologies and rules) are neither possible (or impossible) nor desirable (or undesirable) to the extent that the respective ideologues (on different sides) would like us to believe.

Needless to say, neither of these extreme views is reasonable.

Instead, this book offers an alternative (better) way to understand the future of morphology, especially in the dialectic context of typologies and rules -- while learning from different approaches in the literature but without favouring any one of them (nor integrating them, since they are not necessarily compatible with each other).

More specifically, this book offers a new theory (that is, the fusional theory of morphology) to go beyond the existing approaches in a novel way.

If successful, this seminal project is to fundamentally change the way that we think about morphology in relation to typologies and rules from the combined perspectives of the mind, nature, society, and culture, with enormous implications for the human future and what I originally called its "post-human" fate.