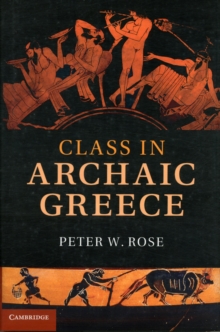 Archaic Greece saw a number of decisive changes, including the emergence of the polis, the foundation of Greek settlements throughout the Mediterranean and Black Sea, the organization of panhellenic games and festivals, the rise of tyranny, the invention of literacy, the composition of the Homeric epics and the emergence of lyric poetry, the development of monumental architecture and large scale sculpture, and the establishment of 'democracy'.

This book argues that the best way of understanding them is the application of an eclectic Marxist model of class struggle, a struggle not only over control of agricultural land but also over cultural ideals and ideology.

A substantial theoretical introduction lays out the underlying assumptions in relation to alternative models.

Material and textual remains of the period are examined in depth for clues to their ideological import, while later sources and a wide range of modern scholarship are evaluated for their explanatory power.