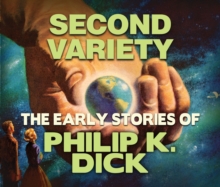 In Second Variety, UN forces have retreated to a moon base in the aftermath of early Soviet victories in a nuclear conflict.

Six years later, the Soviet leadership asks for negotiations to end the war.

A UN officer travels back to earth to discover that not only have the Claws learned to replicate themselves, they have also created a much deadlier cyborg that threatens humanity itself.

The inspiration for the movie Screamers.