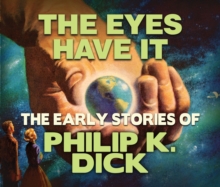 The Eyes Have It eAudiobook MP3

The Eyes Have It is a humorous, early short story by Philip K.

Dick that first appeared in Science Fiction Stories in 1953.

In it, a bus-riding reader of a discarded melodrama with an overactive imagination is persuaded by the hackneyed prose that the world has been taken over by aliens.

Thus, when eyes slowly roved around the room, the reader imagines disembodied eyeballs traveling of their own free will.

A rare example of satire from the Dick canon.