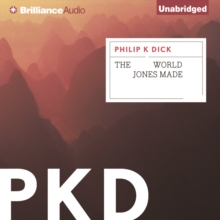 The World Jones Made eAudiobook MP3

The World Jones Made is a classic Philip K. Dick mash-up, taking deep philosophical musings and infusing them with wild action. Floyd Jones has always been able to see exactly one year into his future, a gift and curse that began one year before he was even born.

As a fortuneteller at a postapocalyptic carnival, Jones is a powerful force, and may be able to free society from its paralyzing Relativism.

If, that is, he can avoid the radioactively unstable government hit man on his tail.