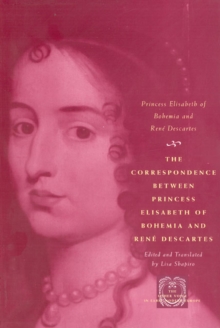 The Correspondence between Princess Elisabeth of Bohemia and Ren? Descartes Paperback / softback

Part of the Other Voice in Early Modern Europe (CHUP) series

Their correspondence contains the only known extant philosophical writings by Elisabeth and reveals her mastery of metaphysics, analytic geometry, and moral philosophy, as well as her keen interest in natural philosophy.

The letters are essential reading for anyone interested in Descartes' philosophy, in particular his account of the human being as a union of mind and body, as well as his ethics.

They also provide a unique insight into the character of their authors and the way ideas develop through intellectual collaboration.

Philosophers have long been familiar with Descartes' side of the correspondence.

Now Elisabeth's letters - never before available in translation in their entirety - emerge in this volume, adding much-needed context and depth both to Descartes' ideas and the legacy of the princess. Lisa Shapiro's annotated edition, which also includes Elisabeth's correspondence with the Quakers William Penn and Robert Barclay, will be heralded by students of philosophy, feminist theorists, and historians of the early modern period.