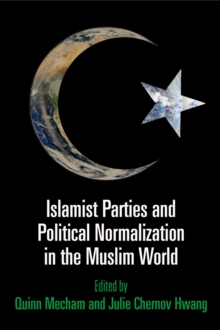 Islamist Parties and Political Normalization in the Muslim World Hardback

Since 2000, more than twenty countries around the world have held elections in which parties that espouse a political agenda based on an Islamic worldview have competed for legislative seats.

Islamist Parties and Political Normalization in the Muslim World examines the impact these parties have had on the political process in two different areas of the world with large Muslim populations: the Middle East and Asia.

Collectively they articulate a theoretical framework to understand the strategic behavior of Islamist parties, including the characteristics that distinguish them from other types of political parties, how they relate to other parties as potential competitors or collaborators, how ties to broader Islamist movements may affect party behavior in elections, and how participation in an electoral system can affect the behavior and ideology of an Islamist party over time. Through this framework, the contributors observe a general tendency in Islamist politics.

Although Islamist parties represent diverse interests and behaviors that are tied to their particular domestic contexts, through repeated elections they often come to operate less as antiestablishment parties and more in line with the political norms of the regimes in which they compete.

While a few parties have deliberately chosen to remain on the fringes of their political system, most have found significant political rewards in changing their messages and behavior to attract more centrist voters.