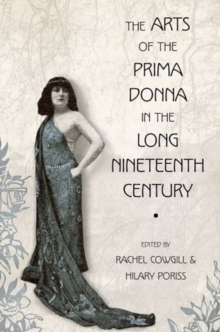 Female characters assumed increasing prominence in the narratives of nineteenth- and early twentieth-century opera. And for contemporary audiences, many of these characters - and the celebrated women who played them - still define opera at its finest and most searingly affective, even if storylines leave them swooning and faded by the end of the drama.

The presence and representation of women in opera has been addressed in a range of recent studies that offervaluable insights into the operatic stage as cultural space, focusing a critical lens at the text and the position and signification of female characters.

Moving that lens onto the historical, The Arts of the Prima Donna in the Long Nineteenth Century sheds light on the singers who created and inhabitedthese roles, the flesh-and-blood women who embodied these fabled "doomed women" onstage before an audience. Editors Rachel Cowgill and Hilary Poriss lead a cast of renowned contributors in an impressive display of current approaches to the lives, careers, and performances of female opera singers.

Essential theoretical perspectives reflect several broad themes woven through the volume-cultures of celebrity surrounding the female singer; the emergence of the quasi-mythical figure of the diva; explorations of the intricate and sundry arts associated with the prima donna, and with her representation inother media; and the diversity and complexity of contemporary responses to her.

The prima donna influenced compositional practices, determined musical and dramatic interpretation, and affected management decisions about the running of the opera house, content of the season, and employment of otherartists - a clear demonstration that her position as "first woman" extended well beyond the boards of the operatic stage itself. The Arts of the Prima Donna in the Long Nineteenth Century is an important addition to the collections of students and researchers in opera studies, nineteenth-century music, performance and gender/sexuality studies, and cultural studies, as well as to the shelves of opera singers and enthusiasts.