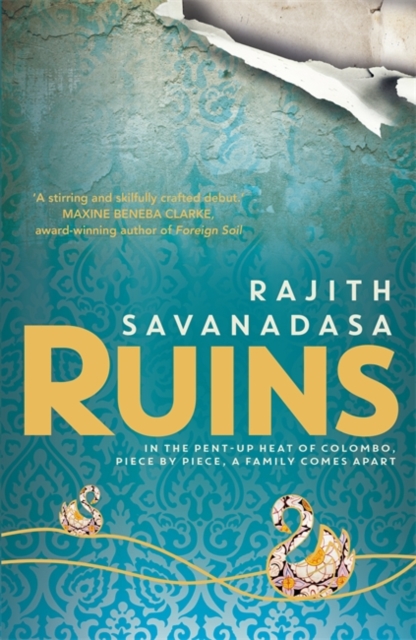 'RUINS is a stirring and skilfully crafted debut, and Savanadasa's characters are so vividly drawn they feel like family.

With his sharp and masterful observations of race, class and gender in the "new" Sri Lanka, Savanadasa takes his seat beside Omar Musa, Alice Pung and Michael Mohammed Ahmad to usher in the brave and stunning new dawn of diverse Australian fiction.' Maxine Beneba Clarke, award-winning author of FOREIGN SOILA country picking up the pieces, a family among the ruins. In the restless streets, crowded waiting rooms and glittering nightclubs of Colombo, five family members find their bonds stretched to breaking point in the aftermath of the Sri Lankan civil war. Latha wants a home. Anoushka wants an iPod. Mano hopes to win his wife back. Lakshmi dreams of rescuing a lost boy. And Niranjan needs big money so he can leave them all behind. 'A highly accomplished and well-oiled book . . . It claims the attention of the reader with rare confidence and doesn't let it go . . . This book could well achieve the same kind of success as The Kite Runner.' SYDNEY MORNING HERALD'[Savanadasa's] writing recalls Christos Tsiolkas' recent work ... distinct and convincing, RUINS heralds the arrival of a gifted new talent in Australian fiction.' BOOKS+PUBLISHING'An absolute must-read' WOMAN'S DAY'An outstanding debut novel' WEST AUSTRALIAN'RUINS is an impressive debut.

Savanadasa joins other important contemporary Australian-Sri Lankan novelists . . . in enriching the globalised phenomenon that is Australian literature.' THE SATURDAY PAPER'RUINS stands out from other Australian debuts for its ambitious structure, its vibrant setting, and the depth and complexity of the Sri Lankan family at the centre of the story.' READINGS'an intelligent, engaging novel' DARK MATTER ZINE'A rich and colourful story of family and country, its complexity revealed in layers . . . Only through the eyes of others can we begin to see a place.' Inga Simpson, author of the critically acclaimed WHERE THE TREES WERE