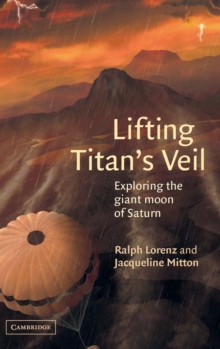 Lifting Titan's Veil is a revealing account of the second largest moon in our solar system.

This world in orbit around Saturn is the only body in the solar system with an atmosphere strikingly similar to Earth's.

Titan is like a giant frozen laboratory that may help scientists understand the first chemical steps towards the origin of life.

Beginning with its discovery in 1655, the authors describe our current knowledge of Titan, including observations made before the space age, results from the Voyager missions of the 1980s, and recent revelations from the world's most advanced telescopes.

Ralph Lorenz includes his personal experiences in preparing for the Cassini mission, which will reach Saturn in 2004 and release the Huygens probe into Titan's atmosphere in 2005.

This book is a splendid introduction to Titan, and will appeal to anyone interested in astronomical discovery and space exploration.