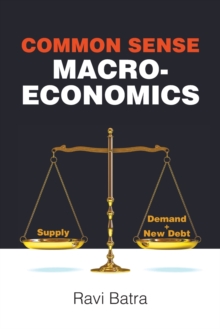 In a world of negative interest rates, extreme inequality and trillion-dollar budget deficits, it is safe to say that conventional macroeconomics needs an overhaul.

Common Sense Macroeconomics is an innovative guide to various concepts of macroeconomic analysis.

Presented in a student-friendly and accessible way, this textbook is an ideal introduction to all who seek to foresee economic developments and address some of the key problems of our time.Specifically, this book innovates as follows.Ravi Batra, a Professor of Economics at Southern Methodist University and known for his accurate forecasts such as the 2008 crash, argues that the goal of macroeconomics is to raise the living standard of all, not just a privileged few.

Contrary to popular belief, relentless monetary expansion to finance budget deficits actually makes the rich richer and the poor poorer, which has been happening all over the world.

Ethical policies and efficiency that create general prosperity go together.

In order to increase everyone's income, governments should generate competition and outlaw mergers among large and profitable firms.

Inequality arises from monopoly capitalism, because then wages lag behind productivity and generate a rising wage-productivity gap.

This is the ultimate source of almost all economic troubles and imbalances.

While the growing gap is inherently unfair, it also leads to vast income disparity and wealth concentration, stock market bubbles and crashes, recessions and eventually depressions.

It is the rise in the wage gap that preceded the Great Depression of the 1930s and now the Great Recession of 2008. Hence governments should not stifle competition and vigorously enforce anti-trust laws.