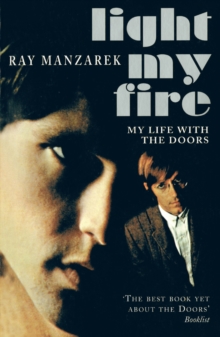 Light My Fire - My Life With The Doors Paperback / softback

The Doors were arguably the most important rock-and-roll band of the 1960s, unquestionably a catalyst for American music as we know it.

Their music was the product of late-sixties southern California, with its idyllic facades.

The Doors looked beyond these facades and wrote music about what they found, making them the ultimate symbol for rebellion and alienation: the key to the 1960s, counter-culture.

Together with Robby Krieger and John Densmore they created a musical and cultural legend.

Their original mix of jazz, classical, Californian surf, Flamenco guitar and Chicago blues made an irreversible impact on the music of the day, and the course of pop music ever since.

Ray Manzarek and Jim Morrison were both UCLA Film School graduates, best friends and rarely apart until Morrison moved to Paris shortly before his death in 1971.

Ray Manzarek knows secrets about Jim Morrison and The Doors that others could only guess at; until now.

In this unique musical biography, Manzarek reveals the truth behind the legendary rock band.

His story gives illumination to the dark myths and lays to rest the rumours that have abounded about Jim Morrison and the band for years.

Light My Fire truly gives us an insight into the times, the enigmatic lead singer, and the magic circle that was The Doors.