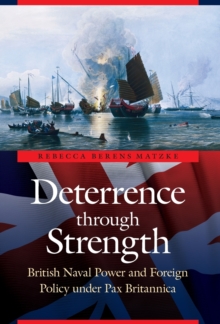 The notion of a Pax Britannica-a concept implying that Britain's overwhelming strength enforced global peace in the era that began with Napoleon's defeat in 1815-largely ended with the British Empire itself.

Although most historians still view this period as a departure from the eighteenth century, when lengthy coalition wars were commonplace, critics argue that Britain had only limited means of exercising power in the nineteenth century and that British military or naval strength played an insignificant role in preserving peace.

In Deterrence through Strength, Rebecca Berens Matzke reveals how Britain's diplomatic and naval authority in the early Victorian period was not circumstantial but rather based on real economic and naval strength as well as on resolute political leadership.

The Royal Navy's main role in the nineteenth century was to be a deterrent force, a role it skillfully played.

With its intimidating fleet, enhanced by steam technology, its great reserves and ship-building capacity, and its secure financial, economic, and political supports, British naval power posed a genuine threat.

In examining three diplomatic crises-in North America, China, and the Mediterranean-Matzke demonstrates that Britain did indeed influence other nations with its navy's offensive capabilities but always with the goal of preserving peace, stability, and British diplomatic freedom.