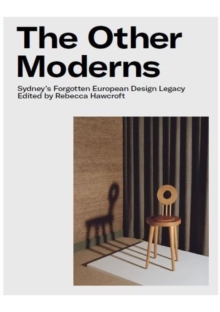 While Harry Seidler is one of Australia's most famous architects, little is known of his European-born contemporaries.

The Other Moderns uncovers the work of Sydney's forgotten emigre architects, interior designers and furniture makers working from the 1930s to 1960s, and reveals their groundbreaking impact on modernist design.

Highlighting the direct connections between Sydney and the European design centres of Vienna, Berlin and Budapest, the book provides a new understanding of modernism.

Profiling the work of architects like Henry Epstein and Hugo Stossel, and Gerstl Furniture, The Other Moderns tells the story of the network of architects, designers, property developers, retailers and photographers working together to bring a distinctly European style to mid-century Australia.

Richly illustrated with rare photography, including stunning images from Austrian-born photographer Margaret Michaelis, and furniture from the collection of HotelHotel Canberra, the book explores the work of this unacknowledged group of style makers for the first time.

Tells the fascinating stories of a generation of European-born designers, and their huge influence on Australian modernist design, for the first time.

Events planned at HotelHotel and other heritage and design groups.

Foreword by Nectar Efkarpidis (one of the founders of Hotel Hotel).