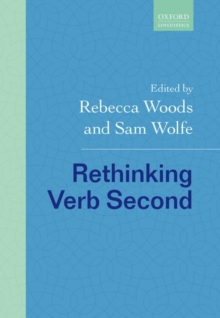 This volume provides the most exhaustive and comprehensive treatment available of the Verb Second property, which has been a central topic in formal syntax for decades.

While Verb Second has traditionally been considered a feature primarily of the Germanic languages, this book shows that it is much more widely attested cross-linguistically than previously thought, and explores the multiple empirical, theoretical, and experimental puzzles that remain in developing anaccount of the phenomenon.

The range of languages investigated is also broader than in previous work: while novel issues are explored through the lens of the more familiarGermanic data, chapters also cover Verb Second effects in languages such as Armenian, Dinka, Tohono O'odham, and in the Celtic, Romance, and Slavonic families.

The analyses have wide-ranging consequences for our understanding of the language faculty, and will be of interest to researchers and students from advanced undergraduate level upwards in the fields of syntax, historical linguistics, and language acquisition.