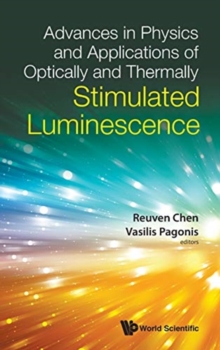 In this volume, international leading experts in the study of thermally and optically stimulated luminescence give an up-to-date, comprehensive coverage of the theoretical and experimental aspects of these subjects, as well as their applications.The theory of thermoluminescence (TL) and optically stimulated luminescence (OSL) are discussed in detail including mainly solid state models of localized and delocalized transitions.

These models cover the effects occurring during the excitation by irradiation and the read-out by heating or by exposure to light.

The methods described consist of analytical mathematical considerations as well as numerical simulations.The main application of these effects, namely radiation dosimetry, includes personal and environmental dosimetry, as well as retrospective dosimetry and the dosimetry of cosmic radiation and space missions.

Also discussed in detail are archaeological and geological dating, the use of luminescence dosimetry in medical physics as well as general applications in geosciences, other model subjects such as time-resolved luminescence and thermally assisted OSL, and the sister-subject of thermoluminescence in photosynthetic materials.