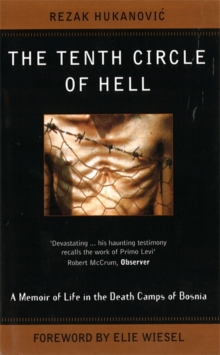 The Tenth Circle Of Hell : A Memoir of Life in the Death Camps of Bosnia Paperback / softback

On May 13 1992, the Bosnian civil war finally came to Prijedo, a once-peaceful city where Muslims, Croats and Serbs had lived side by side for centuries. The Serb occupation of Prijedor was an exercise in what the victors called 'ethnic cleansing' whereby the town's Muslim and Croat citizens were rounded up and sent to concentration camps. Among those who lived though the nightmare was the journalist Rewak Hukanovic, whose riveting memoir chronicles the crimes against humanity that were committed by the Bosnian Serbs in the death camps of Omarska and Manjaca. Through the summer and fall of that endless year, Hukanovic and his friends, colleagues, relatives and neighbours were subjected to terror , torture, and grisly death. Through his unbelieving eyes we see the patina of civilization stripped away from aggressor and victim alike, revealing a brutality that calls into question all our notions of human decency.