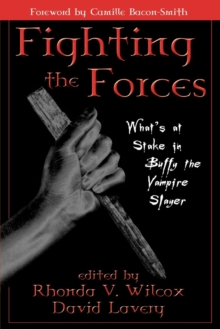 Fighting the Forces : What's at Stake in Buffy the Vampire Slayer Paperback / softback

In the essays collected here, contributors examine the series using a variety of techniques and viewpoints.

They analyze the social and cultural issues implicit in the series and place it in its literary context, not only by examining its literary influences (from German liebestod to Huckleberry Finn) but also by exploring the series' purposeful literary allusions.

Furthermore, the book explores the extratextual, such as fanfiction and online discussion groups.

The book is additionally supplemented by an online journal Slayage (www.slayage.tv), created by the book editors in acknowledgement of the ongoing nature of television art. Rhonda V. Wilcox and David Lavery have written and edited several books and articles exploring the social, literary, and artistic merit of quality television.

In addition to Buffy the Vampire Slayer, their work has covered a variety of programs including Twin Peaks, Northern Exposure, The X-Files, and The Sopranos.