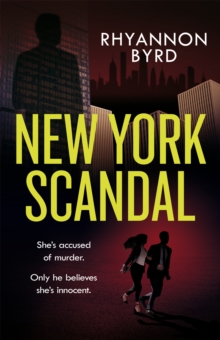 She's accused of murder. Only he believes she's innocent. If you love Melinda Leigh, Laura Griffin and Linda Howard, you'll be gripped by Rhyannon Byrd's explosive romantic thriller, New York Scandal. Readers give Rhyannon Byrd 5 stars!'Amazing story and action, as always''Addictive and enthralling''Had me from the first page''Fantastic...interesting and gripping''Love all her books'New York's biggest scandal. A love that defies the odds. When Lottie Beckett is framed for her husband's murder by an obsessed stalker, she goes on the run.

Taking refuge in New York City, she spends each day terrified that her past will track her down...and destroy her. The most difficult thing Callan Hathaway ever had to do was watch Lottie marry another man.

Nothing about that day felt right, and when he finds her waiting tables in a tiny Brooklyn cafe, his protective instincts won't allow him to walk away a second time.

But while he knows that Lottie is innocent, becoming involved with a wanted woman, when his younger sister is embroiled in a brutal political battle for the office of NYC mayor, could prove devastating to his family. The way Callan sees it, his only choice is to flush out the real killer...and the clock is ticking.

He and Lottie face the fight of their lives for the future they so desperately want...and the love they never expected. Praise for Rhyannon Byrd's thrilling love stories:'Exciting, sexy, and romantic...with a couple that dazzles.

Check out the passionate Dangerous Tides titles: Take Me Under, Make Me Yours and Keep Me Closer.