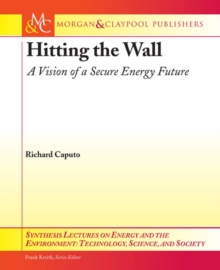 Hitting the Wall : A Vision of a Secure Energy Future Paperback / softback

Part of the Synthesis Lectures on Energy and the Environment: Technology, Science, and Society series

Hitting the Wall examines the combination of two intractable energy problems of our age: the peaking of global oil production and the overloading of the atmosphere with greenhouse gases.

Both emerge from the overconsumption of fossil fuels and solving one problem helps solve the other.

The misinformation campaign about climate change is discussed as is the role that noncarbon energy solutions can play.

There are nine major components in the proposed noncarbon strategy including energy efficiency and renewable energy.

Economics and realistic restraints are considered and the total carbon reduction by 2030 is evaluated, and the results show that this strategy will reduce the carbon emission in the United States to be on track to an 80% reduction in 2050.

The prospects for "clean" coal and "acceptable" nuclear are considered, and there is some hope that they would be used in an interim role.

Although there are significant technical challenges to assembling these new energy systems, the primary difficulty lies in the political arena.

A multigenerational strategy is needed to guide our actions over the next century.

Garnering long-term multiadministration coherent policies to put the elements of any proposed strategy in place, is a relatively rare occurrence in the United States.

More common is the reversal of one policy by the next administration with counterproductive results.

A framework for politically stable action is developed using the framework of "energy tribes" where all the disparate voices in the energy debate are included and considered in a "messy process." This book provides hope that our descendants in the next century will live in a world that would be familiar to us.

This can only be achieved if the United States plays an active leadership role in maintaining climatic balance.