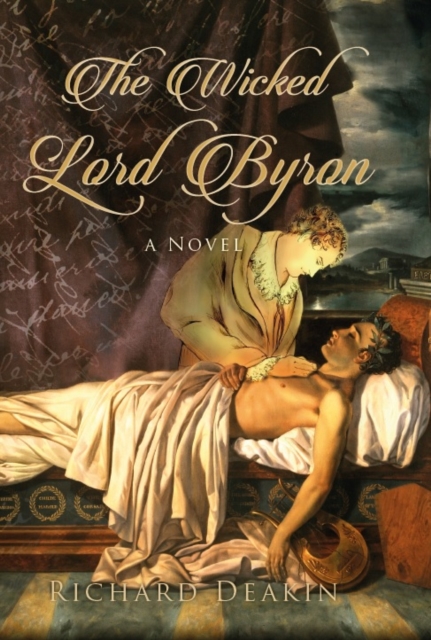 THE WICKED LORD BYRON recreates the soul and voice of Byron, whose unforgettable character marks a defining moment in modern consciousness.

The great poet lives his life as if forging his own legend.

Self-obsessed yet self-sacrificing, because of the astonishing breadth of his point of view he can always see the funny side of the tragedy of human existence.

He evolves into the most iconic personality of the age - with irresistible beauty, poetic genius, outrageous sexuality, and a commitment to the revolution against tyranny in England, Italy and finally Greece. ****On his deathbed in Missolonghi, where he has come to lead part of the Greek army in their war of independence from the Turks, the two halves of Byron's soul, laughing Dandy and tragic Romantic, split apart and, occasionally arguing over details, relive the life story - a process that might happen to us all at the end.

The young Byron has a strange and stressful upbringing - including being sexually initiated by his maid at the age of ten, and living in the shadow of his great uncle the first "Wicked Lord" who killed his best friend in a duel.

At Cambridge, where he keeps a bear in his rooms, he is befriended by eminent Dandy and professional gambler Scrope Davies, from whom he derives his sense of style, and the rather more sensible John Cam Hobhouse. ****After taking the "Grand Tour" of Europe he touches on the spirit of the age in the poem CHILDE HAROLD'S PILGRIMAGE and become the first modern celebrity - ludicrously famous around the world, the favoured icon of English high society, the essential guest in a series of balls and fashionable events in Piccadilly.

Countless ladies hurl themselves at the handsome poet.

But he cannot resist the one forbidden fruit, a romance with his beloved half sister Augusta, with whom he conceives a baby. ******In order to salvage his reputation he makes a disastrous marriage which has the opposite effect - when his prim wife Annabella files for a separation, the resulting scandals cast him down from the pinnacle of the fashionable society he once dominated, and exile him to the turmoil of revolutionary Europe.

He considers suicide in the high purity of the Swiss Alps, then makes friends with the poet Percy Shelley and his entourage.

On one opium fuelled evening they hold a contest to write a horror story: Mary Shelley begins writing Frankenstein and Byron begins the first vampire novel, the two greatest monsters of fiction born on the same night. *****He goes to Venice and fornicates his way through the most orgiastic high society in the world, where both wives and husbands are allowed to sleep with whoever they please after marriage. But finally the endless promiscuity palls and he decides to "go no more a-roving/ So late into the night." He falls in love with the Contessa TERESA GUICCIOLI, and joins her family in the Italian revolution for independence from Austrian rule. ****When the Italian forces are ruthlessly crushed, he sets up the legendary commune near Pisa with Teresa and family, brother poet Shelley, Mary Shelley, and the piratical adventurer Trelawny.

But Shelley's tragic drowning destroys the little community, prompting him to leave Italy to give his life and fortune to the Greek revolution for independence from the Turks. ****Completing the narrative frame we return to Byron's deathbed in Missolonghi, where the two halves of his soul, laughing Dandy and tragic Romantic, reach the end of reliving their life together, and finally make peace at the moment of death.