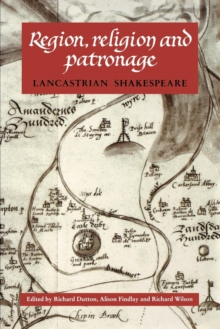 Explores the network of social, political and spiritual connections in north west England as a site for regional drama, introducing the reader to the non-metropolitan theatre spaces which formed a vital part of early modern dramatic activity.

Uses the possibility that Shakespeare began his theatrical career to provide a range of new contexts for reading his plays.

Examines the contexts in which the apprentice dramatist would have worked, providing new insight into regional performance, touring theatre & the patronage of the Earls of Derby.

Examines the experiences of Catholic families and the way in which Lancashire's status as a Catholic stronghold led to conflict with central government's attempts to create a united state..

All this feeds into innovative readings of individual plays such as Twelfth Night, Romeo and Juliet and A Midsummer Night's Dream. -- .