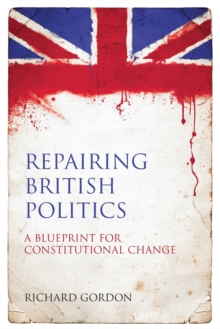 The constitutional crisis of 2009, sparked by the 'expenses scandal', led rapidly to the questioning of our entire political order.

This book presents a major new constitutional analysis of the way we are governed.

At the heart of the crisis lay an absence of accountability at the core of government.

This would replace parliamentary sovereignty, which makes accountability more difficult.

A written Constitution is not merely desirable; it is a constitutional necessity if Britain is to have true representative democracy.

It would change our lives for the better by defining the over-arching values which we consider inviolable.

The result would be a more rational, humane and inclusive society based on greater citizen involvement.

Without a clear focus, constitutional reform will not happen.

The approach taken here is therefore essentially practical and designed to provide a focal point around which a wider debate might be centred. Written in an easily accessible style and including a Glossary of Essential Terms Repairing British Politics is intended as much for the intelligent general reader as for those professionally interested in law and politics.

Part 1 sets out a number of arguments in favour of a written Constitution, as well as the most common objections.

Part 2 presents a working draft in the form of one possible model for a Constitution.

Observations and explanatory notes are attached to each section of this draft Constitution.

This model Constitution is intended as the first stage in a public debate, designed to provoke further discussion about the content and method of legislating into law a written Constitution.

Part 3 contains the draft of the Act of Parliament that would be needed to introduce any form of constitutional change.

We are currently facing a crisis of trust in British politics.

Whichever party forms the government the questions raised in Repairing British Politics will not go away.

Also by Richard Gordon   |  View all

Conflicting Models for the Origin of...