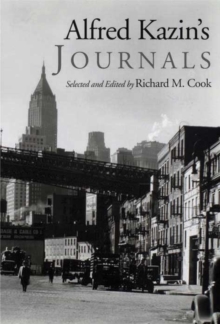 Selected by Kazin's acclaimed biographer, an enlightening collection of the private writings of one of the twentieth century's most fascinating intellectuals. At the time of his death in 1998, Alfred Kazin was considered one of the most influential intellectuals of postwar America.

What is less well known is that Kazin had been contributing almost daily to an extensive private journal, which arguably contains some of his best writing.

These journals collectively tell the story of his journey from Brooklyn's Brownsville neighborhood to his position as a dominant figure in twentieth-century cultural life. To Kazin, the daily entry was a psychological and spiritual act.

To read through these entries is to reexperience history as a series of daily discoveries by an alert, adventurous, if often mercurial intelligence.

It is also to encounter an array of interesting and notable personalities.

Sketches of friends, mistresses, family figures, and other intellectuals are woven in with commentary on Kazin's childhood, early religious interests, problems with parents, bouts of loneliness, dealings with publishers, and thoughts on the Holocaust.

The journals also highlight his engagement with the political and cultural debates of the decades through which he lived.

He wrestles with communism, cultural nationalism, liberalism, existentialism, Israel, modernism, and much more.

Judiciously selected and edited by acclaimed Kazin biographer Richard Cook, this collection provides the public with access to these previously unavailable writings and, in doing so, offers a fascinating social, historical, literary, and cultural record.