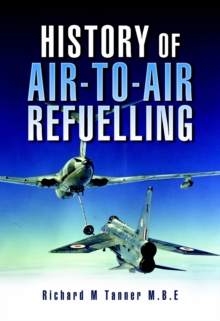 This is a unique account of the development and operational use of air-to-air flight refuelling since its early beginnings in the USA and the UK to the equipment that is in use today.

The author draws upon his life-long career as senior design engineer with the successful British company In-Flight Refuelling who were responsible for the development of the hose and drogue technique now preferred by many of the world's air forces.

The story begins in the early 1920s when the art of air refuelling was part of the Barn Storming record-breaking attempts that were popular in the USA.

It continues into the late thirties when successful experiments were made by Sir Alan Cobham using the Handley-Page Harrow, Short Empire and Armstrong-Whitworth Whitley aircraft.

Amazingly, apart from the enthusiasm of Squadron Leader Atcherley (later to become Air-Vice Marshal), the Royal Air Force were not interested in pursuing this great technical advantage during World War II and it was the USAAF who requested the British invention to experiment with on their B-17s and B-24s; eventually enabling them to carry out retaliatory bombing raids on Tokyo after the attack on Pearl Harbor. Despite successful post-war trials with British civilian airlines it was again the Americans who placed an order with In-Flight Refuelling to equip their B-29s and B-50s.

The Korean War saw extended use of operational air-to-air refuelling for the first time and now the 'tanker fleet' is an essential unit in major air-forces around the world.