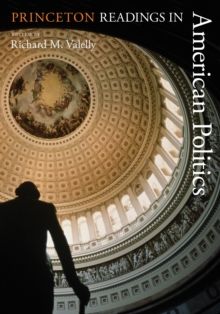 It brings together political science that has stood the test of time and recent cutting-edge analyses to acquaint undergraduate and graduate students with the substantive, conceptual, and methodological foundations they need to make sense of American politics today.

Schlozman, Deborah Stone, Marta Tienda, and Kent Weaver, among others.

The book is organized in sections that cover the major American political institutions--the presidency, Congress, the courts--as well as core topics such as political parties, macroeconomic management, voting and elections, policymaking, public opinion, and federalism.

Richard Valelly provides an insightful general introduction to political science as a vibrant form of inquiry, as well as a succinct, informative introduction to each reading. Rigorous yet accessible, Princeton Readings in American Politics can serve as a primary textbook or as a supplement to standard introductory texts. * Offers an exciting new way to learn about American politics * Features accessible scholarship by leading political scientists * Covers all the major topics * Serves as a primary textbook or supplementary reader for undergraduate and graduate students