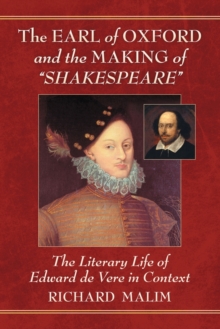 The Earl of Oxford and the Making of Shakespeare : The Literary Life of Edward de Vere in Context Paperback / softback

The identity of Shakespeare, the most important poet and dramatist in the English language, has been debated for centuries.

This historical work investigates the role of Edward de Vere, the 17th Earl of Oxford, establishing him as most likely the author of Shakespeare's literary oeuvre.

Topics include the historical background of English literature from 1530 through 1575, major contemporary transitions in the theatre, and a linguistically rich examination of Oxford's life and the events leading to his literary prominence.

The sonnets, Oxford's early poetry, juvenile "pre-Shakespeare" plays, and his acting career are of particular interest.

An appendix examines the role of the historical William Shakespeare and how he became associated with Oxford's work.