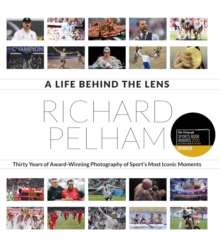 A Life Behind the Lens : Thirty Years of Award Winning Photography from Sport's Most Iconic Moments Hardback

A Life Behind the Lens is a collection of the very best work of Richard `Dickie' Pelham, the multi award-winning chief sports photographer of The Sun for the past 30 years.

He has covered six Olympic Games, six World Cups, any number of Test matches and many championship boxing bouts, capturing the moments of triumph and despair, the great goals, the knockout punches, the key wickets and the gold-medal glory.

He has been trackside, ringside, pitchside and poolside as well as in the studio and on the training grounds with the biggest names in world sport, including Usain Bolt, Mo Farah, Jessica Ennis-Hill, Andy Murray, Paul Gascoigne, David Beckham, Tom Daley, Lennox Lewis and Anthony Joshua.

His pictures have featured on memorable front and back pages and centre spreads.

The images are accompanied by Dickie's own recounting of the human stories behind the pictures and the technical secrets of a master of his trade.