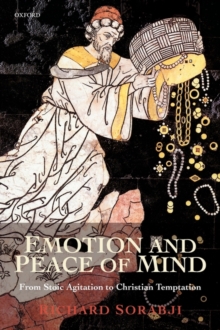 Emotion and Peace of Mind : From Stoic Agitation to Christian Temptation Paperback / softback

Richard Sorabji presents a ground-breaking study of ancient Greek views of the emotions and their influence on subsequent theories and attitudes, pagan and Christian.

The central focus of the book is the Stoics, but Sorabji draws on a vast range of texts to give a rich historical survey of how Western thinking about this central aspect of human nature developed. Stoicism is not, Sorabji makes clear, about gritting your teeth.

It can successfully banish stress by showing you how to assess your situation differently.

But there were rival views, that emotional stress depends on irrational forces in the mind, or, as modern brain research explains, physical forces in the body, so that changing your assessment is only sometimes effective.

The debate also concerns the different roles of philosophy, music, and the arts in calming stress. Orthodox Stoics marginalized as mere side-effects the initial agitations which they could not treat.

In Christianity we see how one culture can transform another.

Sorabji shows how the Christians turned the Stoic theory of initial agitations into a theory of initial temptations and devised new techniques to combat what came to be called the seven cardinal sins. Emotion and Peace of Mind is a magisterial work of scholarship which will be fascinating for anyone with an interest in the emotions from a historical or contemporary perspective.