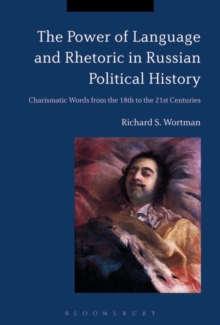 The Power of Language and Rhetoric in Russian Political History : Charismatic Words from the 18th to the 21st Centuries Paperback / softback

This book examines the rhetorical force of certain key words in the discourses of Russian state, political thought, and literature.

It considers how these terms took on a life of their own, imposing the designs of the Russian state and defining the hopes of educated society in the process. By exploring the usage of these words in a wide range of texts, Richard Wortman provides glimpses into the ideas and feelings of leading figures and thinkers in Russian history, from Peter the Great to Alexander Herzen and Nicholas Berdiaev, as well as writers like Mikhail Lermontov, Ivan Turgenev, and Fedor Dostoevsky, giving a sense of the intellectual and emotional universe they inhabited. The Power of Language and Rhetoric in Russian Political History provides both students and scholars with a specific focus through which to approach Russian culture and history.

This book is essential reading for students of Russian government, thought, literature and political action.