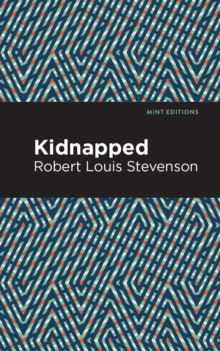 Kidnapped was published in 1886 amid one of the most productive periods of Robert Louis Stevenson's career. Although it was immediately met with popular success and critical acclaim, the novel was derided for decades as a story for children before being recognized as a major work of English literature.

Set in the aftermath of the Jacobite uprising of 1745, and full of a rich blend of English and Scots, Kidnapped is a powerful work with strong Scottish ties. The narrative follows David Balfour, a 17-year-old orphan whose uncle, the wretched and disturbed Ebenezer, conspires to steal the family estate, Davidâ€™s rightful inheritance. When David discovers his uncleâ€™s plan, Ebenezer tricks the boy and sells him to Captain Hoseason, a slaver embarking for the Carolinas. Blindsided by a blow to the head, David awakes in the hold of the Covenant, bound with rope and helpless as the ship bears him toward the terrors of slavery. By a stroke of faith, however, the ship gets lost in fog and strikes a smaller boat near the west coast of Scotland. In the ensuing chaos, David and one of the wreckâ€™s survivors, Jacobite rebel Alan Breck Stewart, gain control of the ship and force Captain Hoseason to turn the Covenant toward the mainland. When the ship runs up against rocks, David finds himself alone on shore, and bravely begins his landward journey to regain his inheritance. Swept up in political circumstances far beyond his control, and faced with the danger awaiting him at home, David must do all he can to survive.

To read Robert Louis Stevensonâ€™s Kidnapped is to enter a world fully formed by the mind of one of historyâ€™s greatest storytellers. David Balfourâ€™s story is gripping not just because it is a tale of survival, but because his struggle to overcome the merciless turns of fate is, to its core, unbearably and beautifully human. Kidnapped is a historical adventure novel adored by readers, critics, and writers alike. It is a story for children and adults who refuse to accept that hope is a thing to outgrow.

With a beautifully designed cover and professionally typeset manuscript, this new edition of Robert Louis Stevensonâ€™s Kidnapped is a classic of English literature reimagined for modern readers.