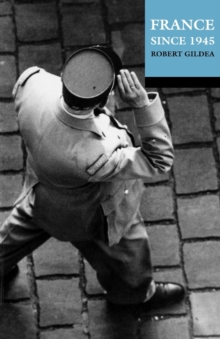 The last fifty years of French history have seen immense challenges for the French: constructing a new European order, building a modern economy, searching for a stable political system.

It has also been a time of anxiety and doubt. The French have had to come to terms with the legacy of the German Occupation, the loss of Empire, the political and social implications of the influx of foreign immigrants, the rise of Islam, the destruction of rural life, and the threatof Anglo-American culture to French language and civilization. Robert Gildea's account examines the French political system and France's role in the world from 1945 to 2000.

He looks at France's attempt to recover national greatness after the Second World War, its attempt to deal with the fear of German resurgence by building the European Community, and its struggle to preserve its Empire.

He also discusses the Algerian War and its legacy, and the later development of a neo-colonialism to preserve its influence in Africa and the Pacific.

Gildea alsoexamines the rise and fall of the two Republics, the rise of and fall of De Gaulle, and the revolution of 1968, along with topics such as the construction of the myth of the Resistance, the painful truths of French involvement in anti-Semitic persecution, and France's continuing obsession with nationalidentity.