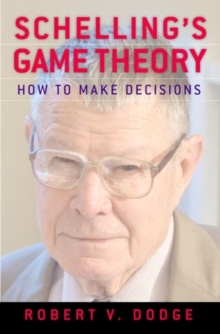 by Robert V. (Author of The Strategist: The Life and Times of Thomas Schelling) Dodge

Thomas Schelling won the Nobel Prize in economics "for having enhanced our understanding of conflict and cooperation through game-theory analysis." This came after he had taught a course in game theory and rational choice to advanced students and government officials for 45 years.

In this book, Robert Dodge provides in language for a broad audience, the concepts that Schelling taught.

Armed with Schelling's understanding of game theory methods and his approaches toproblems, the general reader can improve daily decision making. Mathematics often make game theory challenging but was not a major part of Schelling's course and is even less of a factor in this book.

Along with a summary of the material Schelling presented, included are problems from the course and similar less challenging questions.

While considerable analysis is done with the basic game theory tool - the two-by-two matrix - much of the book is descriptive and rational decision-making is explained with stories.

Chapter supplements are added toilluminate points presented by Schelling, including writings by Paul Krugman, Thomas Friedman, Steven Levitt, and others.