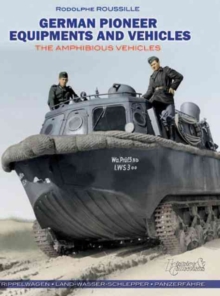 The fruit of seven years' research, this is the first of a series devoted to the vehicles and crossing equipment used by the German pioneers during World War Two, a theme neglected by military specialists until now.

This book now fills the gap, tracing the development of amphibious vehicles from the initial ideas in the thirties to the secret projects at the end of the war which remained on the drawing board. Illustrated with thirty or so colour profiles and more than 200 black and white period photographs, of which a hundred or so are as yet unpublished, this book is the new reference for as yet relatively unstudied subjects such as:- The Trippelwagen amphibious cars and how they evolved- The Land-Wasser-Schlepper in all its forms- The L.W.S.