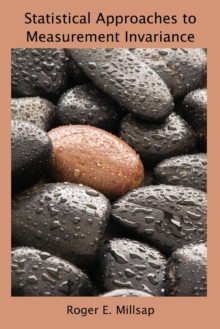 Measurement bias is examined from a general latent variable perspective so as to accommodate different forms of testing in a variety of contexts including cognitive or clinical variables, attitudes, personality dimensions, or emotional states.

Measurement models that underlie psychometric practice are described, including their strengths and limitations.

Practical strategies and examples for dealing with bias detection are provided throughout. The book begins with an introduction to the general topic, followed by a review of the measurement models used in psychometric theory.

Emphasis is placed on latent variable models, with introductions to classical test theory, factor analysis, and item response theory, and the controversies associated with each, being provided.

Identification problems in confirmatory factor analysis are examined along with estimation and fit evaluation and an example using WAIS-R data.

The factor analysis model for discrete measures in multiple populations with an emphasis on the specification, identification, estimation, and fit evaluation issues is addressed in the next chapter.

The use of models in item response theory in evaluating invariance across multiple populations is then described, including an example that uses data from a large-scale achievement test.

Chapter 8 examines item bias evaluation methods that use observed scores to match individuals and provides an example that applies item response theory to data introduced earlier in the book.

The book concludes with the implications of measurement bias for the use of tests in prediction in educational or employment settings. A valuable supplement for advanced courses on psychometrics, testing, measurement, assessment, latent variable modeling, and/or quantitative methods taught in departments of psychology and education, researchers faced with considering bias in measurement will also value this book.