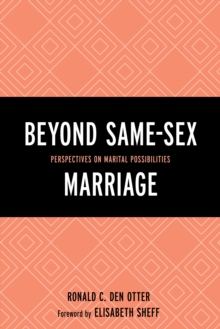 Although the debate over same-sex marriage in the United States has ended, no one seems to know what lies on the horizon.

The conversation about what marriage could be like in the future is no longer confined to academics.

In his dissent in Obergefell, Chief Justice Roberts linked the constitutionally-mandated legal recognition of same-sex marriage to the possibility that states may also have to recognize multi-person intimate relationships as well to avoid discriminating against plural marriage enthusiasts.

The popularity of television shows like TLC's Sister Wives and HBO's Big Love suggests that Americans no longer can be dismissive of the possibility that in the foreseeable future, marriage could, and perhaps should, look very different than it does today. Rather than settling the question of whether states ought to abolish marriage, make it more inclusive, contractual, or call it something else, this book exposes readers to some of the normative, legal, and empirical questions that Americans must address before they can deliberate thoughtfully about whether to keep the marital status quo where monogamy remains privileged.

Unlike much of the debate over same-sex marriage, they exchange reasons with one another as they discuss marital reform.

This book is for ordinary Americans, their elected representatives, and judges, to help them ultimately decide whether they want to continue to define marriage so narrowly, make it more inclusive to avoid discrimination, or have the state leave the marriage business.

This edited, interdisciplinary volume contains eight original contributions, all of which illuminate important but often neglected areas of the topic.